Diagram of Classical WhipplePancreatoduodenectomy is a formidable operation It involves removal of the head and uncinate process of the pancreas, the duodenum, the common bile duct and the gallbladder, with reconstruction by anastomosing the pancreatic remnant to the proximal jejunum or stomach, common hepatic duct to proximal jejunum and stomach or proximal duodenum to the jejunum.

The classical operation is called the Whipple resection, which includes removal of the distal stomach (gastric antrum and pylorus as well). These days we usually preserve the stomach and pylorus, the operation being called the pylorus-preserving proximal pancreatoduodenectomy (PPPPD).

This operation is done most commonly for tumours of the head and/or uncinate process of the pancreas or distal part of the common bile duct.

Less common reasons for doing this operation are tumours of the duodenum and chronic pancreatitis with an inflammatory mass involving the pancreatic head and uncinate process. 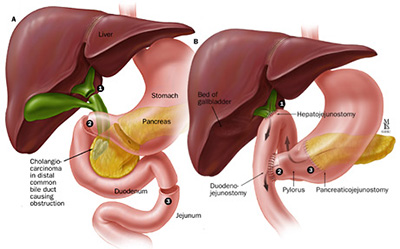