In the majority of cases, it is done by minimally invasive (laparoscopic) surgery, using four small incisions through which ports (5-12mm diameter tubes) are inserted into the abdomen, which is then insufflated with carbon dioxide.

Gallstones are hardened deposits of bile pigment and cholesterol. Bile is, in chemical terminology, a supersaturated solution in which cholesterol is kept in solution by virtue of its chemical relationship with other chemicals, lecithin and bile salts—if the balance of concentrations is upset, probably facilitated by stasis in the gallbladder, cholesterol precipitates and forms chrystals, which coalesce to form stones. Some people have very small round stones, some have larger faceted stones, and some have much larger stones. Some people have numerous stones, and others have only one or a small number.

Many people who have gallstones may not experience any symptoms.

When gallstones cause problems, the symptoms vary. The most common complication of gallstones is gallstone colic manifesting as intermittent attacks of pain in the upper central abdomen (epigastrium) Typically, the pain starts a few hours after a meal, often in the early hours of the morning and can be extremely severe pain, which may be associated with nausea, vomiting and bloating. Typically, the pain radiates round to the back near the bottom of the shoulder blade (scapula), usually on the right. This presentation occurs if a gallstone impacts in the neck of the gallbladder or cystic duct, the short duct that connects the gallbladder to the main bile duct. This scenario can progress to acute cholecystitis, where the bile in the gallbladder becomes infected and causes a severe illness with fever, continuous pain, and tenderness under the right rib margin. Another complication of gallstones is gallstone pancreatitis, which occurs if a small gallstone passes through the cystic duct, down the common bile duct and transiently lodges in the ampulla of Vater, the common channel where the common bile duct and main pancreatic duct join before opening, through the sphincter of Oddi, into the duodenum. Impaction above the sphincter causes obstruction of the pancreatic duct and pancreatic enzymes, which are usually only activated in the duodenum, become activated inside the pancreas and start digesting pancreatic tissue, which leads to severe inflammation. Acute pancreatitis can be a very serious illness, and severe acute pancreatitis has a high mortality rate. Another complication of gallstones is obstruction of the main bile duct, which results in obstructive jaundice (yellow pigmentation of the skin and eyes, passing dark urine and pale stools and severe itching). If the biliary obstruction is complicated by a bacterial infection, another very serious complication, known as cholangitis, develops, If this is not decompressed urgently, it can progress rapidly to septicaemia. The last and by far the least common complication is obstruction of the bowel by a gallstone, which occurs when a very large stone erodes through the gallbladder wall into the adjacent duodenum.

Gallbladder stones are usually very reliably diagnosed by abdominal ultrasound (U/S). While U/S is reliable at diagnosing bile duct obstruction, it is not good for visualising stones in the main bile duct, which are usually diagnosed by magnetic resonance imaging (MRI). Acute pancreatitis is diagnosed by a combination of elevated levels of amylase and lipase in the blood and by CT scan of the abdomen.

A rare type of cholecystitis occurs in the absence of gallstones (acalculous cholecystitis). This usually occurs in very ill patients who have been in the hospital for treatment of the other underlying serious illness. 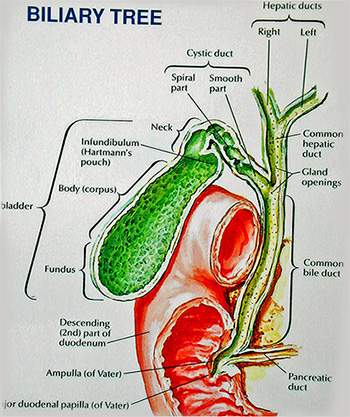 When do you need a cholecystectomy?

A cholecystectomy is recommended if a person has symptoms compatible with one or more of the complications of gallstones and gallstones are found in the gallbladder. Asymptomatic people who have gallstones in the gallbladder don't need surgery unless there are underlying diseases such as diabetes or other illness which would allow serious infections to be very rapidly progressive.

What is a Cholecystectomy?

Cholecystectomy is the surgical removal of the gallbladder, which is attached to the undersurface of the liver. The primary function of the gallbladder is to store bile secreted by the liver. Bile is required to help digest food. The gallbladder contracts and empties after food enters the duodenum and causes the release of cholecystokinin (CCK), which simultaneously stimulates relaxation of the sphincter of Oddi, enabling the bile to enter the duodenum, together with pancreatic juice. Cholecystectomy is usually a very effective treatment for symptomatic or complicated gallstone disease, and for the vast majority of patients, it is the best treatment option. In some patients who have severe septicaemia and serious comorbid diseases which makes any surgery very risky, percutaneous insertion of a drain into the gallbladder or bile duct under local anaesthetic or endoscopic placement of a stent in the common bile duct can relieve the serious sepsis and buy time until the risk of surgery has decreased.

Does Removal of The Gallbladder Cause Side Effects?

If the gallbladder is removed, bile from the liver distends the common bile duct, and most still only empties into the duodenum when food in the duodenum stimulates the secretion of CCK, which causes the sphincter to relax. However, there may be some leakage of bile through the sphincter of Oddi, but this very seldom causes any physiological changes, except perhaps, slightly increased stool frequency. If the gallbladder is removed because it is diseased, it is very unlikely that there will be any side effects, because the gallbladder was dysfunctional before removal anyway.

How a cholecystectomy is performed

A cholecystectomy is usually performed laparoscopically under general anaesthetic. The surgeon makes a small incision near the umbilicus ("belly button") and inserts a port, which is a small plastic tube with a valve and a little tap into the abdomen. Through the little tap, the abdomen is filled with carbon dioxide, a harmless gas, to distend the abdomen and create more space to view the surgical site adequately with the laparoscope, a tubular telescope that is connected to a small video camera. The laparoscope is inserted through the valve at the top of the port. With the abdomen distended and the laparoscope inside the abdomen, the surgical site is displayed on a screen in the operating room. More ports are placed to insert long, thin instruments with very small, delicate tips. The crux of the operation is a dissection of the cystic artery and cystic duct, prior to clipping and dividing these. Clear dissection and demonstration of the cystic duct and cystic artery is known as "the critical view of safety" because the most serious complication of a cholecystectomy is an injury to the main bile ducts. After demonstrating the critical view of safety the cystic artery and cystic duct are clipped and divided, and the gallbladder is then dissected off the liver, after which it is removed in a little bag through the umbilical incision.

For added safety, Dr Stapleton routinely does a cholangiogram prior to dividing the cystic duct. This involves inserting a catheter into the cystic duct and injecting a contrast material ("dye") while screening the area with a mobile X-ray machine (fluoroscopy) The reasons for doing this are: 1) to ensure there are no gallstones or other disease of the bile duct and 2) to ensure that the cystic duct has been correctly identified. If gallstones are unexpectedly found in the bile duct, the surgeon can proceed directly to common bile duct exploration to remove the stones. This involves inserting a very thin, flexible Choledochoscope through the cystic duct and trying to retrieve the stones with a Dormier basket passed through the biopsy channel of the Choledochoscope. If this cannot be done an endoscopic retrograde cholangiogram (ERC) will be required to remove the gallstones from the duodenum, usually at a later stage.

Patients are usually discharged on the day after the surgery, but there's a possibility some might stay longer. Drinking fluids is allowed immediately after surgery, and patients usually eat normally from the evening after the surgery. There are mild pain and discomfort at the incision wounds and, quite often, pain in the shoulder - referred pain due to irritation of the diaphragm. Pain lasts for a few days, so mild painkillers are prescribed on discharge. If there is severe pain, it is likely there is something seriously wrong, and the surgeon should be contacted urgently.