When performing a distal pancreatectomy, it is usually necessary to remove the spleen too, because the splenic vein and artery and lymphatic drainage of the pancreas lie in very close proximity to the posterior aspect of the body and tail of the pancreas.

The new standard, oncologically-sound operation for malignant tumours of the body and tail of the pancreas is known as Radical Antegrade Modular Pancreatosplenectomy (RAMPS). The procedure involves first division of the pancreatic neck and the splenic vein at its junction with the superior mesenteric vein. The pancreatic body, splenic vein and retropancreatic tissue are then dissected off the front of the superior mesenteric artery, the left side of the aorta and the anterior aspect of the left renal artery and vein. Dissection proceeds to the left to include removal of the spleen in the final stages of the procedure. 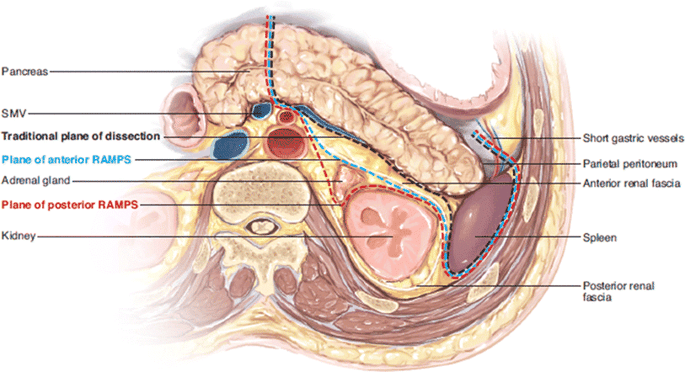 Spleen-preserving distal pancreatectomy is performed for benign or very low-grade malignant tumours or pancreatic trauma if it is possible to safely dissect the pancreas from the splenic blood supply, which can be a rather tedious endeavour.

Although the spleen is not imperative for survival, removal of the spleen is not without consequences. The spleen is an immunological organ with essential immune functions. A splenectomy is associated with an increased risk of infections by encapsulated bacteria such as Streptococcus Pneumoniae, Haemophilus Influenzae and Neisseria meningitides (Meningococcus). Infection with any of these bacteria after a splenectomy can cause a very fulminant septic illness, known as overwhelming post-splenectomy infection (OPSI) that can result in death. People without a spleen may also be more susceptible to disease by Gram-negative pathogens such as Capnocytophagia Carnimorsus and Bordetella B. Holmesii, and intra-erythrocyte parasites such as Malaria and Babesia.

The spleen also removes effete blood cells from the circulation, so a splenectomy can sometimes predispose to thromboembolism.

If possible, it is desirable to preserve the spleen, but patients for whom splenectomy is necessary should be given vaccinations against these encapsulated bacteria, preferably 14 days before the planned surgery or within 14 days after emergency splenectomy.

How distal pancreatectomy is performed

Distal pancreatectomy may be done by open surgery, but increasingly often, in selected patients, Dr Stapleton does the operation by a minimally invasive (laparoscopic) technique, as is now widely accepted within the international hepato-pancreato-biliary surgical community. Minimally invasive surgery allows more rapid recovery and shorter hospital stay, as well as a better cosmetic result. It's essential to consider that the primary objective is the complete removal of the tumour and the regional lymph nodes, to afford the best chance of cure of the malignant tumour(s) of the pancreas. The surgeon must not compromise this primary objective by attempting or persisting with minimally invasive approaches when oncological integrity would be better served by open surgery.

The pancreas is a soft, solid organ that secretes enzymes that digest food. Pancreatic surgery is challenging because the fragile tissue does not hold sutures well and is susceptible to injury if not handled very gently. If pancreatic enzymes leak into tissues outside the pancreas or gut, they can digest these tissues, with resulting necrosis and inflammation, which might then become secondarily infected.

After a distal pancreatectomy

Exocrine insufficiency (insufficient digestive enzyme secretion) fails to digest the food, especially fats, that are eaten. This manifests as steatorrhoea, a syndrome characterised by flatulence, bloating, abdominal cramps and passage of large, pale, offensive and oily faeces. If exocrine insufficiency develops, it can be managed by swallowing capsules containing pancreatic enzymes with food.