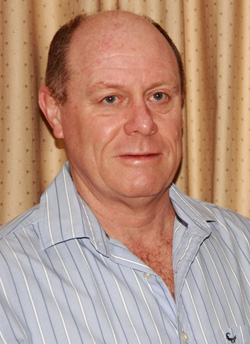 Dr Graham Stapleton obtained his medical degree (M.B.Ch.B.) from the University of Cape Town in 1978. He completed post-graduate training at Groote Schuur Hospital before becoming a Fellow of the College of Surgeons of South Africa (FCS) to qualify as a General Surgeon in 1989. After completing his surgical training, Dr Stapleton spent a year as a research fellow in the MRC UCT Liver Centre investigating the blood supply of the human intrahepatic and extrahepatic bile ducts and reduced liver transplants. It was during these years that Dr Stapleton developed his passion for Hepato-Pancreato-Biliary (HPB) surgery.

From January 1991 to June 1993, Dr Stapleton was employed as a Junior Consultant in the Department of Surgery at Groote Schuur Hospital. In 1991, he was attached to Professor Dent's firm doing Surgical Oncology and Surgical Endocrinology. In 1992, he was attached to the Hepato-Pancreato-Biliary and Upper Gastrointestinal Surgery firm working under Professors Terblanche, Bornman and Krige. At the end of 1992, Dr Stapleton was awarded a Master of Medicine degree by the University of Cape Town for his dissertation on gastric mucus in a porcine peptic ulcer model.

In July 1993, Dr Stapleton moved to Belfast, Northern Ireland for a year, where he had an appointment as Overseas Senior Registrar at the Royal Victoria Hospital and Belfast City Hospital. Dr Stapleton then moved to London in 1994 to take up an Overseas Senior Registrar post at the Hammersmith Hospital and Royal Postgraduate Medical School, where he received advanced training in pancreatic, hepatobiliary, endocrine surgery and laparoscopic surgery.

Dr Stapleton returned to Cape Town in 1995 to commence private practice at Wynberg Hospital (later renamed to Southern Cross Hospital), before moving to the Kingsbury Hospital in 1999, where he established a Hepato-Pancreato-Biliary (HPB)unit. Dr Stapleton had started doing advanced laparoscopic surgery at Wynberg Hospital and was able to further develop this after his move to Kingsbury Hospital, doing his first laparoscopic liver resection in 2003.

Soon after he started in private practice, Dr Stapleton established a close friendship and working relationship with Dr Michael Elliot, an experienced and highly skilled colorectal surgeon. Through his experience assisting Dr Elliot on a regular basis until about 2013, Dr Stapleton developed advanced skills in complex colorectal surgery.

In 2005, after attending numerous courses on laparoscopic bariatric surgery in Europe and in South Africa, Dr Stapleton established a multidisciplinary team, branded as The Chrysalis Clinic, to evaluate and counsel patients suffering from morbid obesity and doing laparoscopic Roux-en-Y gastric bypass and sleeve gastrectomy operations.

In 2016, Dr Stapleton was approached by Netcare to establish a referral centre for hepato-pancreato-biliary surgery at their new Netcare Christiaan Barnard Memorial Hospital on the Foreshore in Cape Town, and he relocated his practice to this state-of-the-art facility in March 2017.

Dr Stapleton has, throughout his professional career, delivered many lectures relating to his fields of interest.

In his spare time, Dr Stapleton keeps fit by hiking and training regularly. In his youth he was a passionate cricketer, playing at WP Premier League level for UCT and WPCC and being awarded a Full Blue by UCT. He also played 1st XV rugby at school at Dale College and for Smuts Hall in the Internal League at UCT. The doctor's main passion and pastime now is wildlife and landscape photography and he takes every opportunity to travel across the mesmerising Southern African subcontinent, spending downtime in the African bush, photographing wildlife and African landscapes.