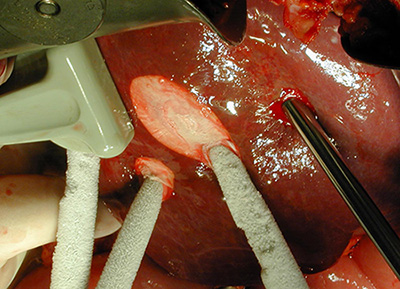 Ablation of tumours in the liver involves destroying tumours by various physical means, under sonographic control, without actually removing the tumour. When tumours are ablated one aims to destroy a small rim of normal liver tissue surrounding the tumour, in addition to the tumour itself.

Cryoablation was the first effective method of ablation. This involves destroying the tumour by freezing, using liquid nitrogen, which lowers the temperature of the ablated tumour to -190oC. Cryoablation destroys cell walls without causing denaturation of cellular proteins.

Radiofrequency ablation (RFA) destroys tissue by agitating cellular ions that results in heating it to 100oC and causing coagulative necrosis.

The most recently developed and marketed effective method of ablating tumours is by microwave ablation.

Cryoablation, while an effective method of tumour ablation, has been abandoned because it was often associated with serious adverse events, particularly haemorrhage when the "iceball" cracked and because it sometimes caused very dangerous falls in the platelet count.

The effectiveness of RFA is limited by charring of tissue because charred tissue does not allow uniform heating.

The fact that RFA can be done percutaneously is an attractive feature, although whether percutaneous delivery is, in my opinion, not as effective as RFA administered at open or laparoscopic surgery in most cases and many tumours are not easily accessible percutaneously

RFA is most useful for treating small hepatocellular carcinomas in cirrhotic livers, because surgical resection of parts of cirrhotic livers is much more difficult than is resection of normal livers, while if cirrhosis is advanced and hepatic functional reserve is very limited, surgery can not be tolerated. For HCC of up to 3cm in diameter RFA has been shown to be equivalent to resection in oncological efficacy. The effectiveness of RFA in HCC may be related to the fact that HCCs are soft tumours occurring in hard, cirrhotic livers, which might allow for an "oven" effect that improves its efficiency, relative to its use in metastases. Metastases are usually hard tumours occurring in soft, normal livers. My personal opinion is that RFA for metastases should be confined to metastatic tumours no larger than 2cm in diameter. A possible exception to this is melanoma metastases, which are usually soft and more suited to effective radiofrequency ablation.

A problem with both RFA and cryoablation is "the heat sink effect" when tumours lying adjacent to major blood vessels are not effectively ablated because the blood flowing past the tumour does not allow its temperature to reach target temperature - not low enough with cryo and not hot enough with RFA.

Bile ducts, stomach, bowel and diaphragm adjacent to tumours ablated with cryo or RF can be collaterally damaged, so, unless the liver tumour can be separated from any adjacent organ, ablation would be contraindicated when a tumour is in close proximity to adjacent vital structures.

There is some evidence that incomplete ablation results in "activation" of residual tumour resulting in enhanced malignant growth.