Total gastrectomy involves removing the entire stomach with reconstruction by anastomosing the oesophagus to the jejunum.

Sleeve gastrectomy is an operation that is done to effect weight loss in morbidly obese individuals. It involves removing most of the stomach but leaving behind a thin tube of the lesser curvature aspect of the stomach and the pylorus.

Gastric cancers are most commonly adenocarcinomas, which arise from the cells lining the inside of the stomach. The most important predisposing factor to gastric adenocarcinoma is chronic Helicobacter pylori-associated gastritis. Helicobacter pylori is a bacterium that has the unique ability to survive in the acid environment in the stomach and causes a low-grade chronic inflammation that can often cause ulceration of the stomach and duodenum. While the incidence of cancer of the distal stomach has decreased in recent times, cancer of the proximal stomach and the gastro-oesophageal junction is becoming more common, perhaps associated with the increased incidence of obesity and consequent gastro-oesophageal reflux.

Less frequent tumours of the stomach are Gastrointestinal Stromal Tumours (GISTs), leiomyomas, leiomyosarcomas and neuroendocrine tumours. GISTs arise from individual pacemaker cells and can be very benign in behaviour or very aggressive. Sometimes they can be tremendously large by the time they are diagnosed. The more malignant ones can metastasise to the liver and lungs and may form satellite tumours in the peritoneal cavity, but, unlike gastric adenocarcinomas, they seldom metastasise to lymph nodes, so surgical resection does not require systematic resection of draining lymph nodes, as is necessary for adenocarcinomas. Very large GISTs or metastases can be controlled with a group of drugs known as tyrosine kinase inhibitors. Imatinib (Gleevec) is the most effective of these drugs and the one used as first-line therapy.

Neuroendocrine tumours (NETs) of the stomach are classified as types one, two and three. Types 1 and 2 arise from the enterochromaffin-like (ECL) cells of the stomach and develop in the setting of chronically elevated levels of the hormone gastrin.

In type one, the cause of the high gastrin levels is underlying chronic atrophic gastritis, usually as a result of an autoimmune process that damages the parietal cells of the stomach so that they stop secreting HCl and the gastric juice becomes alkaline instead of acidic. Type 1 gastric NETs very rarely metastasise but can cause chronic anaemia. The anaemia may be due to iron deficiency due to persistent, occult bleeding from the tumours or vitamin B12 deficiency due to atrophic gastritis and deficient secretion of intrinsic factor. This protein forms a complex with cyanocobalamin (Vit B12) to allow its absorption in the distal small intestine. Iron and B12 levels should be checked regularly and replaced if necessary. If iron deficiency is a persistent problem or there is concern about the growth of the tumours on surveillance, the surgical option to treat Type 1 gastric NETs is a gastric antrectomy, which removes the source of the excess gastrin and regression of the gastric NETs usually follows. However, Type 1 gastric NETS do not often need to be resected, other than endoscopic removal with a snare and regular endoscopic surveillance. These patients must not be given acid inhibiting drugs like proton pump inhibitors (PPIs) and Histamine 2 receptor antagonists (H2RAs), because this will only aggravate the alkalinity of the stomach and promote further excessive gastrin secretion If dyspeptic symptoms are present, they may be controlled with Sucralfate, but if this fails or iron-deficiency is problematic gastric antrectomy can be a viable solution.

Type 2 gastric NETs develop secondary to a gastrinoma, a tumour that arises from gastrin-secreting cells, usually in the duodenum or head of the pancreas. These tumours autonomously secrete excessive gastrin, which results in a syndrome known as Zollinger-Ellison Syndrome. Type 2 gastric NETs very seldom metastasise, but the underlying gastrinoma certainly can and often does metastasise. It is, therefore, necessary to surgically remove the gastrinoma or control its secretion with a somatostatin analogue and PRRT or drugs such as Everolimus (Afinitor) or Sunitinib (Sutent).

Type 3 gastric NETs arise de novo from the ECL cells without being stimulated by gastrin. These tend to be much more aggressive tumours, behaving more like adenocarcinomas and they frequently metastasise to lymph nodes, liver and elsewhere. The surgical treatment for these should be similar to that for gastric adenocarcinoma viz. subtotal or total gastrectomy with omentectomy and regional lymphadenectomy.

When a gastric NET is diagnosed, it is, therefore, crucial to establish which type it is, because the treatment for the different types is very different. This requires stopping PPI treatment, biopsying the tumours and biopsying the surrounding fundal and antral mucosa.

Symptoms of stomach cancer and gastroesophageal cancer include:

How a gastrectomy is performed

For complicated benign duodenal and distal gastric ulcers and in the present unusual event that does not respond to optimal medical therapy with PPI's, the distal portion of the stomach and duodenal cap is removed and the proximal gastric remnant is anastomosed to the duodenum or jejunum (proximal small bowel). 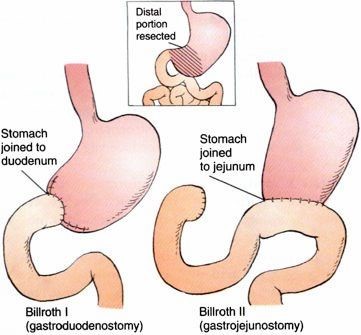 For malignant tumours of the distal stomach, the treatment is a radical subtotal gastrectomy, in which the distal 2/3 of the stomach and duodenal cap are removed, along with the omentum and the draining lymph nodes. After closing the duodenum, the gastric remnant is anastomosed to the jejunum (proximal small intestine). 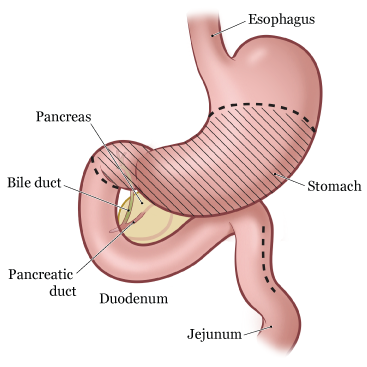 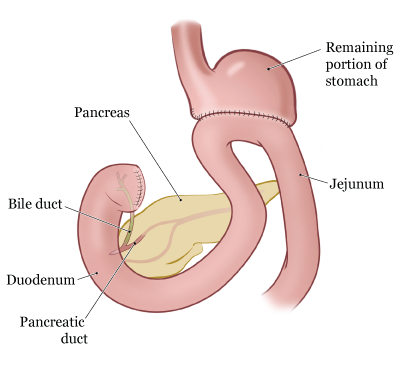 For proximal gastric cancers, total gastrectomy is required. The entire stomach, the omentum and the draining lymph nodes are removed, the duodenum is closed, and the small bowel is anastomosed to the distal oesophagus. 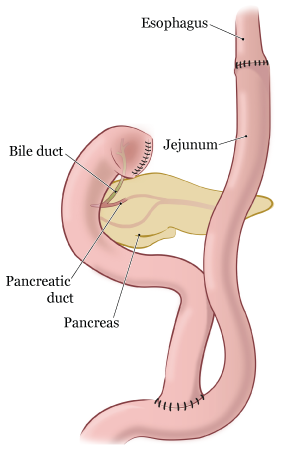 Recovery depends on the surgical method used for the gastrectomy. The patient is usually required to stay in the hospital for six to twelve days and is initially fed intravenously– total parenteral nutrition (TPN). A nasogastric tube, inserted through the nose into the stomach drains the gastric secretions and prevents distension of the remnant stomach and/or small bowel until gastric/intestinal motility returns, usually after about four days. Oral food is then reintroduced gradually, first with small sips, then free fluids, soft food and eventually regular food.

Two specific problems that can occur after partial or total gastrectomy are "dumping" and food bolus obstruction of the small intestine. Dumping is a symptom complex of feeling faint and lethargic and nauseous soon after eating. It usually follows the consumption of food with high carbohydrate content and can be avoided by avoiding sugary, sweet foods. A food bolus obstruction causes severe abdominal cramping pain and vomiting. To prevent this complication people who have had a gastrectomy should chew their food very thoroughly before swallowing and avoid food like bread and dried fruit and biltong.

After a total gastrectomy, there is no stomach to receive a big meal so portions will have to be smaller, and more frequent - the patient would typically consume six small meals per day and not drink fluids with the solid food – drink fluids an hour before and after a meal.