Adrenalectomy is the operation to remove an adrenal gland, usually for a tumour arising from the adrenal gland.

Adrenal tumours may produce excessive amounts of adrenal hormones (functioning tumours) but some (non-functioning) do not secrete excessively.

Tumours that do not secrete excessive amounts of hormones may be detected incidentally by scans done for other reasons ("Incidentalomas") or they may be highly malignant tumours that present with symptoms cused by tumour growth and invasion.

Adrenalectomy may be done laparoscopically or by open surgery, depending on the size and type of tumour. Patients with functioning tumours can have highy complex metabolic problems, which need to be carefully managed before, during and after the surgery to remove these tumours. Optimal management is done in close collaboration with endocrinologists, anaesthesiologists and intensive care physicians. Patients with phaeochromocytoma need to have pre-operative preparation with complete α-blockade and sometimes β-blockade too. During surgery for phaeochromocytomas the surgeon has to be very careful not to handle the tumour excessively because of the risk of sudden rapid release of adrenalin and noradrenalin into the circulation. The surgeon "dissects the patient off the tumour" and tries to clamp or ligate the adrenal vein as early as possible to minimise systemic hormonal release, but the anaesthesiologist needs to have measures in place to control blood pressure from minute to minute. Another problem with removing functioning tumours is that the excessive secretion by the tumour results in suppression of the other, normal, adrenal gland so that after removal of the tumour the patient suddenly experiences very subnormal levels of hormones and the endocrinologist needs to administer the relevant hormones until the suppressed adrenal regains function. Patients with Cushing's syndrome are usually very obese and have very poor healing ability so resecting these tumours laparoscopically is highly desirable, especially as the tumours are usually quite small. The tumours of Conn's syndrome are also preferably removed laparoscopically. On the contrary, open surgery may be preferred for large malignant tumours and for phaeochromocytomas, 10% of which are malignant and they are often very large, too. It may be easier to minimize tumour handling and safer to remove these at open surgery. Furthermore, phaeochromocytomas are bilateral and multiple in about 10% of cases and dealing with those situations would usually be simpler by open laparotomy. 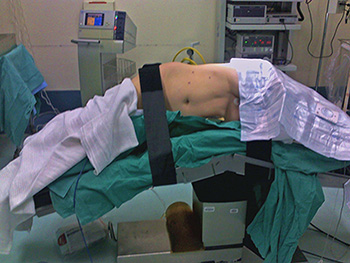 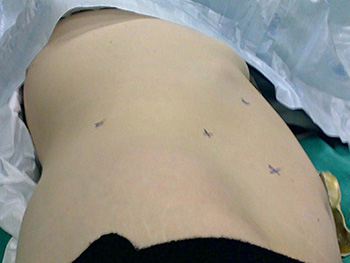 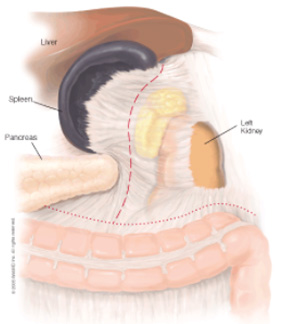